Discovery’s mobile application as a part of supply chain solution

Looking to disrupt the traditional supply chain management, Discovery is building a network that is constituted of three layers. The layers are namely, an IoT tag called Cliot, a user community and data analytics. Although all the three are equally important in developing a robust supply chain solution, the user community is what facilitates the growth of Discovery’s network. Each member of the community forms the nodes in this network by installing Discovery’s mobile application on their smartphones. These phones or nodes are the point of contact whereby Cliot transmits data to them via Wifi or Bluetooth where after the cellular network is utilized to transmit the processed data from phone to a cloud or central server.  Following is a peak into the features of Discovery’s application

Through a blockless DAG network Discovery intends to connect the user smartphones of the community. According to Statista, smartphone users are estimated to reach 2.87 billion by 2020. Due to such massive penetration of smartphones, Discovery can create a massive community base to support the network.

A distributed app or D-App forms the front end of Discovery network. This app facilitates the transmission of data from IoT tags to phones and thereby to the cloud. Transmission link is established between tag and phone via blockchain functionality called smart contracts. When a user is within the vicinity of a tag, the phone and tag enter into a smart contract by means of which public or private key of tag is shared with the phone to be tracked and a ping is recorded on the network along with its details. Once the data is transmitted to the phone, the data is processed at the phone itself and then pushed to cloud or server on the client side.

Discovery zones are the places where IoT tags are located within the proximity of a user. The D-App will keep a regular update of these zones for the users through an AI interface based on historical data and the pings received from other users. The feature of Discovery zones is incorporated to facilitate user support for the network. Besides, zones are also shown based on the routes taken by the user, location frequently visited and etc.ii

To provide more flexibility to users with respect to the utilization of data, the application will have a user configurable setting to limit data usage as per their own preference. The users can have the option to set their data limit based on a periodic or daily basis and by setting apart a percent of data available from their telecom package. This level of customization therefore enables users to get benefits by being in the network and be in control of how much they want to lend to Discovery’s network.

Once the application is installed and the user details are verified, the app will constantly monitor signals from tag, which upon detection, the phone and tag automatically pairs and shares relevant data. To ensure high security, the data residing in user’s phones are periodically erased which additionally ensures that phone storage space is not used up.

The users get rewards in the form of tokens depending on the amount of data that is being lent to the network. The data lent in turn is directly proportional to the number of pings since for each ping, a defined amount of data is being shared. Therefore, the reward is pegged with a certain number of pings as per the prevailing market. The reward is disbursed in the form of tokens that in turn will be based on the market price of DIS token on crypto-exchanges.

The disbursements will be made in the form of micropayments for user gratification based on smart contracts on the ethereal network.

The application also provides a way to invite new members in their contact to join the network. As more members join, the visibility of tags in the network gets more accurate. Besides, the identity of each user is stored on geographically specific ledger in the blockchain. Hence in the event of phone crashing, the data and token amount of the user is saved in the ledger as a backup which can be automatically restored later.

Utilizing high powered machine learning techniques, the location of IoT tags are predicted and nodal traffic is regulated accordingly. This predictive capability enhances network transactional capacity to handle 1000x the traffic that is not currently available in any blockchain based platform. 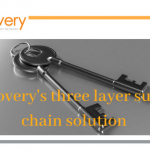 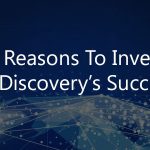 4 Reasons to invest in Discovery’s successInternet of things, Supply Chain